ALEXANDRIA, Va. (March 6, 2019) — Economy Pharmacy in Muskogee, Okla. has earned the National Community Pharmacists Association’s NICE Award (NCPA Innovation Center Excellence) for Overhaul of the Year. This is the second year of the NICE Awards competition, which was created to recognize pharmacies for their efforts to enhance their value, promote their services, and better serve their communities. Economy Pharmacy is one of eight community pharmacies earning a NICE Award but is being recognized with a special unplanned award after excelling across more than half of the award categories.

“Congratulations to Economy Pharmacy and co-owners Chris and Becky Schiller for earning the NICE Award for Overhaul of the Year,” said Kurt Proctor, PhD, president of the NCPA Innovation Center. “The NICE Awards spotlight the best of community pharmacy branding and marketing – the innovations and redesigns that have made promotions more effective and patients’ experiences more rewarding. We were especially impressed by Economy Pharmacy’s significant redesign and are pleased to honor it with Overhaul of the Year.”

Economy Pharmacy has four locations, two in Muskogee and two in Tulsa. The original Muskogee location was built in 1988 and was showing its age, according to co-owner Becky Schiller. The entire pharmacy was basically turned inside out and provided with a vast array of physical upgrades and amenities including signage clearly marking all areas and departments, shelving updates to increase visibility, a pack and ship counter with supplies by the U.S. Post Office, and a public restroom.

“Our latest full remodel of our ‘mothership’ was all about customer conveniences,” co-owner Becky Schiller said. “The removal of curbs into the automatic doors at the entrance were a much-needed necessity. Not only does it make it easier for handicapped individuals, but no one wants to touch door handles sick people have been in contact with all day.”

Economy Pharmacy offerings include standard retail, compliance packaging, compounding, a mobile app, flu clinic information, pediatric services, and online bill pay.
###
Founded in 1898, the National Community Pharmacists Association is the voice for the community pharmacist, representing 22,000 pharmacies that employ 250,000 individuals nationwide. Community pharmacies are rooted in the communities where they are located and are among America's most accessible health care providers. To learn more, visit www.ncpanet.org. 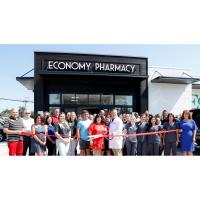