BIXBY — Being on call at the filling station would often keep Ray Cox up late.

“He had to go out at night a lot,” said Sandra Cox, his daughter-in-law.

“Farmers would call and need gas because they were going to start early plowing their fields. Or sometimes drivers would just run out of gas, and he’d have to go help them.”

The late Bixby resident, who worked at Plummer’s Station in the 1930s, would be happy to know that finally his old workplace is getting some service of its own, she said.

The former service station in downtown Bixby, which turns 100 years old this year, is being renovated by the Bixby Historical Society.

And it’s just one piece in the society’s bigger plans, which ultimately will transform its entire property at East Needles Avenue and North Montgomery Street.

Adjacent to the service station, which they hope to turn into a coffee shop, renovation is wrapping up on an old flour mill scale house that will offer rotating exhibits.

The scale house should be ready for a grand opening April 6, Oltmann said.

Further plans call for renovating another old structure on the site, as well as building a brand new historical museum, which will be designed to look like the city’s former railroad depot.

The immediate focus, though, is finishing work on the service station, Oltmann said.

The society has already invested $50,000 in putting a new tile roof on it. To complete the renovation, they estimate it will take at least another $100,000.

The windows have been boarded up for years, but up next new ones will be installed.

The building’s original brickwork, one of its most attractive features, is also being restored.

Built by Samuel Plummer, the two-story station opened in 1921 on what was then the community’s busiest thoroughfare.

It was state of the art at the time, even going out of its way to appeal to female customers.

“We believe it was the first business in Bixby to have a women’s restroom,” Oltmann said.

Business was good for most of the next two decades. But in 1939, the Bixby bridge collapsed. With traffic rerouted to a new bridge, the station lost business.

It would continue on, though, finally closing in the 1980s.

The property and the structures on it were donated to the society in the 1990s.

By that time, the former station, “was just sitting there and deteriorating,” said Cox, society treasurer.

Its former glory was not forgotten, though. The majestic portico that once sheltered the pumps was a good reminder of it.

The pumps are gone now, but will eventually be replaced.

Oltmann estimates it will take a couple of years to complete the full renovation.

“But it could be sooner, if we can attract more donors,” she said.

“We’re a little society. And for years, if we brought in $5,000 a year, that was good enough. It paid for expenses. It’s only been in the last four years that we’ve really come together to do some fundraising.”

To learn more about the society or its projects, go to bixbyhistoricalsociety.com or facebook.com/bixbyhistory. 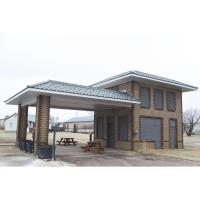